News from the field: COGEZOH 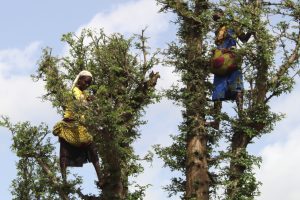 Located in southwestern Niger, Parc W is the most important biodiversity site in the country and surely among the richest in West Africa, home to thousands of species of mammals, reptiles, birds and insects. The vegetation in the park is also unique.This unique value has allowed it to be gazetted as a UNESCO World Heritage Site since 1996. But this does not go without much covetousness. Indeed, this protected area is the subject of many human pressures: poaching, illegal grazing, bush fires, encroachment and daily incursions by fringing communities for resources extraction (picking or cutting). This is not without direct consequences on both park fringing communities and wildlife within the protected area. Thus, we are witnessing an unprecedented phenomenon in recent years: humans exerting great pressure on the resources of the park, these resources how much needed for the maintenance of wildlife in its habitat. To compensate for the lack thus created on its side, this wildlife does not hesitate to attack the crops and livestock of these fringing communities. This inevitably leads to retaliation, poisoning, trapping and mass killings, and causing major losses for biodiversity. Thus, women who illegally enter the park to pick fresh leaves or fruits of Baobab, mutilating the tree must know that in return the primates will compensate for their lack in the fields of corn or cowpea. Or the man who enters in the park to mow the “burgu” (Echinochloa stagnina), how vital to the hippopotamuses, is to expect them devastate their crops during the night.

In response to the needs of local populations to meet their needs for baobab leaves, which are the most used in sauces in the country, the NGO COGEZOH supported the establishment of Baobab nurseries in which the leaves are directly taken by 190 women in 3 target villages of the project. This activity has allowed women to no longer travel long distances and take risks by entering the park, while also producing what they need for their own personal use, and they even market the surplus, production being weekly and spread over the whole year.The project also increased and improved honey production in the target villages of the project. Thus, 50 new beekeepers were trained and equipped with 100 new hives and 15,000 bottles of packaging.Honey is now of much better quality and is probably the first choice of city dwellers. Production has doubled compared to past years, and demand is still far from being covered.In addition, the project has invested a lot in the mitigation of Human-Wildlife conflicts, through the training, implementation and supervision of a network of 40 local informants equipped with means of communication and transport (24 members have already received mobile phones with camera, unlimited communication credit and travel bikes, thanks to a contribution from TreeAid). This network provides information on wildlife incursions into fringed villages and illegal activities (poaching, illegal grazing and other resources picking) in Park W.The work of this network was highly appreciated by the protected area managers who were able to stop and dismantle poaching networks and wild meat traffickers. It also helped to intervene in time to repel some wild animals heading for the villages.In addition, new types of pens have been successfully experimented to ward off attacks of hyenas and lions on cattle. Twelve have been built, with fencing and cuttings of Commiphora africana, which is a plant that tends to disappear in most of Niger. The project also allows the restoration of this plant species in its natural environment.This activity was accompanied by installation of scarecrows and several awareness and training campaigns in the target villages. This allowed for a collective awareness on the behavior to adopt when living within the fringes of a protected area.The NGO’s ambition is to extend its activities to other fringing villages to the W Park, in the perspective to overcome this Human-Wildlife conflict situation over the long term.

This website uses cookies to improve your experience while you navigate through the website. Out of these, the cookies that are categorized as necessary are stored on your browser as they are essential for the working of basic functionalities of the website. We also use third-party cookies that help us analyze and understand how you use this website. These cookies will be stored in your browser only with your consent. You also have the option to opt-out of these cookies. But opting out of some of these cookies may affect your browsing experience.
Necessary Toujours activé
Necessary cookies are absolutely essential for the website to function properly. This category only includes cookies that ensures basic functionalities and security features of the website. These cookies do not store any personal information.
Non-necessary
Any cookies that may not be particularly necessary for the website to function and is used specifically to collect user personal data via analytics, ads, other embedded contents are termed as non-necessary cookies. It is mandatory to procure user consent prior to running these cookies on your website.
Enregistrer & appliquer
PPI Partners : the MAVA FoundationPPI
Interview de Josué Kambasu, FECOPEILEPPI
X