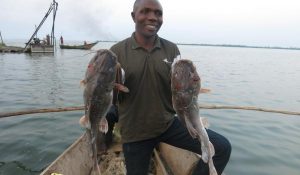 Josué, Hello. You are the secretary general of the FECOPEILE.

Can you tell us a word about this organization and its very specific history?

FECOPEILE means « Federation of Individual Fishermen’s Committees of Lake Edward ». This fishing union has an atypical history and works on the issue of the sustainable management of Lake Edward, a lake of 215 000 ha, located in the heart of the Virunga National Park (780 000 ha), which is a World Heritage Site, and the first African park created in 1925.

This lake, straddling the DRC and Uganda, is of remarkable ecological richness and is home to many species of fish but also migratory or resident birds.

A large number of people are directly dependent on the many ecosystem services provided by the lake, particularly the fishing communities, and the lake has always been, because of its history and issues, a conflicting territory between stakeholders.

FECOPEILE was officially created in March 2012 with the overall objective of defending the rights and interests of fishermen and, more generally, riparian communities dependent on the fishery resources of Lake Edward.

The organization currently gathers all the individual fishermen of Lake Edward in its Congolese part, about 5 600 people from 3 fisheries (Vitshumbi, Kiavinyonge and Nyakakoma) in which there are fishermen’s committees. Women’s organizations involved in the processing and trade of fish from the lake are also part of the organization.

To achieve its objectives, FECOPEILE is working on setting up a consultation framework aimed at joint and concerted planning of the actions carried out by the various Lake Edward stakeholders.

The organization also carries out advocacy actions to extol responsible fishing to ensure the livelihoods of local communities. The purpose of this lobbying is to fight against illegal activities and pollution of the waters of Lake Edward, the surrounding rivers and the watershed.

What are the main constraints, th emain problems faced by Lake Edouard fishermen? What does the collective organization proposed by the FECOPEILE contribute to resolve in part?

The constraints encountered by the fishermen of Lake Edward are multiple, the context of the province of North Kivu being extremely complex.

We can at this point mention the problems of insecurity. The fishermen are indeed threatened by the Maï Maï rebel groups in the southwestern part of the lake (in the areas of Ndwali, Chanika, Ngazi, Muuma, Kakindo and Marestaurant, …).

For example, in November 2018, 5 canoes, 2 engines and 15 fishermen were kidnapped and taken into the bush by the latter. It took a long negotiation to free the victims.

Also in November 2018, a group of armed bandits attempted to capture residents of the Vitshumbi fishery. One fisherman was killed, an other seriously injured, during the clashes. These two cases are just examples of many.

Illegal fishing is also a major problem on the lake. This is supported by the armed groups, who earn substantial income from it, as well as sometimes by some state services and the military present in the area, which makes the problem particularly complex to solve.

Still related to these aspects of legality, the multiplication of the fisheries is also a problem, as they went from 3 to 12, without any control being at the moment observed. The number of pirogues has thus increased from 700 to more than 3 000 and the use of prohibited techniques is also being observed more and more frequently.

All of these problems are interconnected and it should be noted that they all relate to the issue of the lack of law enforcement and of regulations.

Combined with the demographic explosion in the fishing enclaves inside the PNVi (and because of the growing insecurity around the PA), these phenomena lead to a reduction in the productive capacity of the lake, which is extremely problematic. This situation is causing many of the Congolese fishermen to fish in the transboundary area where they are subject to threats and arrests by the Ugandan marine force. At present, at least 97 Congolese fishermen are arrested and sentenced in Uganda to MUBUKU Prison.

This phenomenon has a negative final impact on both poverty and food insecurity, two major issues in this region. All of these elements give you an overview of the issue related to the sustainable and parsimonious management of the Lake Edward ecosystem.

How does the creation of the FECOPEILE contribute to resolve in part these problems?

Through its actions, FECOPEILE seeks to combat the phenomena listed above, particularly by training and sensitizing the various stakeholders in the fisheries sector on the importance of the sustainable management of Lake Edward’s resources, recalling in particular that their well-being and their livelihoods strongly depends on them.

Advocacy and lobbying actions are regularly carried out by our federation in order to mobilize the inhabitants of the area against potential projects that may cause environmental pollution and / or massive destruction of natural resources without respecting national laws and international conventions and commitments signed by our country. We are thinking here for example of potential oil projects within the ViNP.

To lead our advocacy, we conduct a permanent monitoring on the destruction of fisheries resources and the insecurity caused by the Mai-Mai in order to obtain reliable data that can direct our actions towards the competent institutions. So we are currently in possession of a lot of information about the Lake Edward ecosystem.

We also want to undertake, in the future, agro-pastoral projects around the PA in order to fight against the demographic explosion in the fisheries of the Lake Edward and inside the park itself.

Tell us a word about your PPI project.

The lake is under severe pressure due in particular to the lack of a scientific monitoring policy for the fish population and the granting of titles creating the fisheries on Lake Edward without respecting the procedure laid down in this regard.

Added to this is the increased presence of Maï Maï militiamen and a network of illegal fishermen fishing using prohibited techniques in the areas of the bays and spawning grounds of the lake to enrich themselves quickly without any consideration of sustainability.

Finally, the order authorizing the exploration and exploitation of oil in block V of the Albertine rift could in the near future have a strong impact on most of the ViPN.

In view of these elements, our PPI project aims to promote the sustainable management of Lake Edouard’s fisheries resources by improving the socio-biological knowledge of fisheries and by supporting the development of sustainable fishing through the promotion of good local governance. To achieve this we are working on the deployment of communication strategies, we organize awareness campaigns and meetings with fishermen.

The project should thus allow the development of an efficient and reliable system for the permanent monitoring of fishery statistics, particularly through the development of a participatory monitoring application of fishing catch and related activities within each fishery. The application was developed with the collaboration of another PPI partner NGO in Cameroon, AMMCO, which has already developed this type of application in the context of participatory monitoring activities of marine mammals. A partnership with ICCN, the lake’s manager ath the end of the day as it is within the ViPN is in progress on this subject.

What do you expect as support from the public as well as from technical and financial partners?

We need to reach out more to the public, to get more support for our cause, which is not just about the fishermen of the lake, nor the people of North Kivu. Our fight, in particular against the oil exploitation, concerns the whole world, the ViPN being indeed an environmental jewel, classified in World Heritage of UNESCO. It is the first African park created, home to the last populations of mountain gorillas and is a very specific ecosystem.

The preservation of Lake Edward is therefore a fight for a common good that future generations should have the right to see. We must therefore gain strength in advocacy and obtain global support for our fight against its destruction, including through potential future oil exploitation.

The same goes for the technical and financial partners, who I believe should be gathered behind us to help promote sustainable and rational management of this unique and exceptional ecosystem.

We must at the present time rescind the order granting petroleum companies the right to exploit oil within Block V and part of Block IV within the park The potential exploitation of oil in the NGAdji block in Uganda must also be combated as it would also have negative impacts on the biodiversity of the ViPN. Lake Edward is included in these blocks and the operation would be a real disaster and a terrible signal sent to the world in terms of nature protection.

– the presentation of the FECOPEILE project

This website uses cookies to improve your experience while you navigate through the website. Out of these, the cookies that are categorized as necessary are stored on your browser as they are essential for the working of basic functionalities of the website. We also use third-party cookies that help us analyze and understand how you use this website. These cookies will be stored in your browser only with your consent. You also have the option to opt-out of these cookies. But opting out of some of these cookies may affect your browsing experience.
Necessary Toujours activé
Necessary cookies are absolutely essential for the website to function properly. This category only includes cookies that ensures basic functionalities and security features of the website. These cookies do not store any personal information.
Non-necessary
Any cookies that may not be particularly necessary for the website to function and is used specifically to collect user personal data via analytics, ads, other embedded contents are termed as non-necessary cookies. It is mandatory to procure user consent prior to running these cookies on your website.
Enregistrer & appliquer
Interview of Alexis Kaboré, NatudevPPI
28 NEW BIODIVERSITY CONSERVATION PROJECTS IN AFRICAPPI
X