News from the field: AMMCO

Humpback whales living on the coast of Cameroon 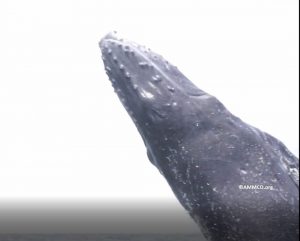 AFRICAN MARINE MAMMALS CONSERVATION ORGANIZATION (AMMCO) is a Cameroonian NGO created in 2014 with the mission to sustainably protect the aquatic megafauna of this country. Less known and benefiting from less protective actions than terrestrial wildlife, it is not less present and highly threatened in this country, like the manatee, a species poached for its meat.

Partner of the PPI since 2013, and having implemented a project to protect the manatees of the Lake Ossa Wildlife Reserve (RFLO), the NGO is working on a project to better understand the ecological and human dynamics in the littoral zone and coastal area north of Limbe, in the South West region. The objective of this project is, in the medium term, to have a better understanding of the dynamics underway in this area and thus to help stakeholders concerned by the issue to better understand the associated issues and thus make decisions allowing to sustainably manage the coastline of this region.

As part of this project, relating to territorial governance, the AMMCO team, in collaboration with the MINFOF (Ministry of Forests and Wildlife), the Merchant Marine and the IRAD, was led to carry out ecological monitoring at sea with the aim of better understanding the wildlife dynamics in the area.

It is clear that this follow-up was a wonderful surprise, with the confirmation of the presence of whales and dolphins, and only a few hundred meters away from the Cameroon coast. 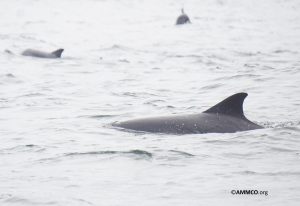 Thus, between the end of August and November, 4 observations of humpback whales, « Megaptera novaeangliae » were made. The individuals observed ranged between 13 and 14 meters, with a ventral portion, the undersides of the fins and whitish caudal fin, while the flanks and the dorsal part were darker. The existence of these cetaceans was reported by fishermen, but this is the first scientific observation. The expeditions also allowed to observe a female accompanied by her calf.

Dolphins of the species « Tursiops Truncatus« , or even bottlenose dolphins have also been observed. Recognizable by their smooth, gray, metal-like skin and curved brow adorned with a melon, the species is present off Limbe. Previously, fishermen had reported their presence and in October, the AMMCO team was able to observe, again for the first time in a scientific perspective, a group made up of about fifty individuals, measuring between 2.5 and 3 meters.

In addition to these « traditional » ecological monitoring aspects, in recent years AMMCO has developed a number of CITIZEN SCIENCE tools, which make it possible to collect information in a participatory manner on the distribution, dynamics and relative abundance of marine mammals including marine turtles. A mobile application, SIREN, has been developed by the NGO and is used by fishermen, scientists and other interested stakeholders to report opportunistic observations of aquatic megafauna.

Each information stored in SIREN is automatically sent to the AMMCO server and appears on a map on the NGO’s website, once the data has been validated by the team of the NGO.

Regarding the monitoring of the Cameroonian megafauna, the next step for the AMMCO team in the coming months is to continue this follow-up, and to intensify them from June to September, in order to continue studying the ecology of these species, estimating their abundance and identifying the main range.

This website uses cookies to improve your experience while you navigate through the website. Out of these, the cookies that are categorized as necessary are stored on your browser as they are essential for the working of basic functionalities of the website. We also use third-party cookies that help us analyze and understand how you use this website. These cookies will be stored in your browser only with your consent. You also have the option to opt-out of these cookies. But opting out of some of these cookies may affect your browsing experience.
Necessary Toujours activé
Necessary cookies are absolutely essential for the website to function properly. This category only includes cookies that ensures basic functionalities and security features of the website. These cookies do not store any personal information.
Non-necessary
Any cookies that may not be particularly necessary for the website to function and is used specifically to collect user personal data via analytics, ads, other embedded contents are termed as non-necessary cookies. It is mandatory to procure user consent prior to running these cookies on your website.
Enregistrer & appliquer
Des nouvelles du terrain: AMMCOPPI
On the networks side: RASTOMAPPI
X